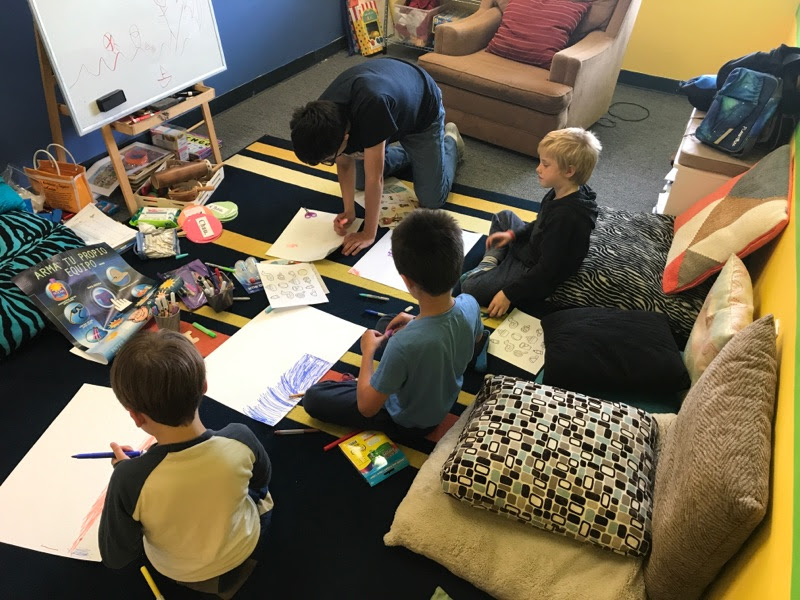 I had a particularly shy 5 year old that needed Spanish lessons. The teachers were great with her and she warmed up to them instantly. There are 2 locations and lots of different class times to chose from, depending on your needs.My only complaint was that it was hard to stick with the same instructors for long periods of time because of rotating schedules, but we only had 1 small window to work with and were inflexible on that so we werent exactly making it easy on them. I would recommend SF Spanish.

Ive been attending SF Spanish for almost two years and have had an amazing experience. My teacher, Romina, is very patient, fun, and has a good grasp on the grammar points of the Spanish language. Also, everyone in our class has been helpful and eager to learn making class a lot of fun.The class is around 70% conversation and 30% lesson material. I knew no Spanish when I first started, but now our teacher and class speaks entirely in Spanish and I can hold simple conversations confidently with others outside my class. I am pretty impressed with that since I only find time to go to a class once a week and I dont study as much as I should.Ive had a very good experience with SF Spanish and recommend it to anyone who would like to learn to converse in Spanish and have a great time while theyre doing it.

I have been attending SF Spanish classes for about 10 years, and have done the immersion trip to Buenos Aires. It is a great way to practice my Spanish so I dont lose it, and to improve all the time. It is also great therapy - we get to talk about what is happening in our lives and families each week in Spanish, with a group of friends. I highly recommend it.

We have been taking Spanish lessons with Romina and her staff for several years. Each lesson is a great learning experience and Romina makes it fun as well.

I decided to try SF Spanish after reading all the nice reviews, but it ended up as a disaster and extreme frustration.I have previously taken Spanish classes with different institutions but SF Spanish was the MOST unprofessional and disappointing experience ever. I learned about this place through LivingSocial, decided to buy 2 deals that they offered - one for assessment class and another one for personal class.After talking with the office assistant Alexis, she booked the assessment class for me. Knowing that I had purchased two deals, she did NOT mention a single thing about the restrictions of using the deal. The assessment class was okay - not great, but just okay. However, when I tried to use the other deal I purchased for personal class, she refused and told me it was invalid. I asked her, you know that I had purchased two deals when I first called you, why did you not mention this rule to me at the first place?She said, Im sorry, we cannot do anything. Try ask for a refund.Thats it.However, it was already to late to ask for the refund at that time because living social has its 7-day rule. And it has to be converted to DealBucks, which are basically credits.I mean, are you serious? Why did you not tell me at the first place? She admitted that she might could have told me at the first place, but still she cannot do anything about it. I told her I want to speak with the manager and Alexis promised that she will call back.More than a week has passed and I have not heard a single word from her manager Romina.Very frustrating.

I had brought my 2yr old to SF Spanish for the reasonings; to have him interact with kids his age, to practice hearing, singing and practice in Spanish.There were a handful of children inside the class. I’d say it’s worth your buck!